We’re posting this episode almost exactly two years after George Floyd was murdered in the street in Minneapolis by Derek Chauvin.

But not enough people know that the US has a group of specially-designated financial institutions that have solutions for these problems.

My guests today are Nicole Elam, CEO of the National Bankers Association, and Robert James II, who chairs the NBA’s board of directors and is also president of Carver Financial Corporation in Savannah, Georgia.

The NBA is the trade association for Minority Depository Institutions, or MDIs. It was founded nearly a century ago, in 1927, to build on the work being done by a group of Black-owned banks that were chartered shortly after the US Civil War, because white-owned banks were not serving the needs of Black communities.

A lot has changed since those days. Nearly a half-century after the NBA’s founding, America enacted a series of civil rights laws that covered banking, including the Fair Housing Act in 1968 and the Equal Credit Opportunity Act in 1975. The government also created a special designation of MDIs in US banking law, giving these institutions access to funding and other special programs. Still, today – another half-century later – the problems of racial economic inequality persist. Solving them requires a complex range of strategies, and MDIs have an important role to play in that effort.

In today’s conversation, we talk about that role, and we also talk about the fact that these banks are struggling. They are very small, and their numbers are declining. As my guests explain, they are starved for capital and that also face an existential threat – one that actually mirrors the threat facing the overwhelming majority of community banks today: how to modernize their technology.

These small, traditional institutions have to compete both with large banks that have armies of software developers and cutting edge technology, and also with new fintechs that have the same. Technology brings huge advantages in today’s financial market (and, let’s face it, in most everything else). On the front end, banks need great technology to meet the expectations of today’s banking customer, especially as millennials become the largest consumer segment. On the back end, banks need efficient operating systems that make them cost-competitive with their rivals, including big banks that have massive economies of scale, and also young fintechs that have no branches and zero legacy technology and can be incredibly lean.

Achieving this technology upgrade is profoundly challenging. These banks rely on core IT processing vendors that are, themselves, working hard on technology modernization but that are usually not positioned to offer the latest and best and to make change affordable. The only way most small institutions can thrive in today’s high-tech world is to team up with fintech and regtech firms as vendors and partners.

Those young firms are all digitally-native. They are founded and led by tech people. They live at the cutting edge of digital change. The fintech sector, once marginal and risky, has now matured enough to include many firms with proven technology and track records. Banks want to work with them, and vice versa – most fintech and regtech firms want to work with banks, which have great advantages over them in customer acquisition and cost of funds. It’s a natural marriage between financial companies that have complementary strengths and weaknesses.

The challenge is how to make it happen.

As we discuss in today’s show, AIR is working with the NBA to help answer that question, for both MDIs and CDFIs – Community Development Financial Institutions. My colleague David Ehrich is working with Nicole, Robert and other partners on a project to identify the gaps and barriers facing these institutions and to find ways to overcome them. In the coming days we’ll be announcing more details, including the names of organizations that are partnering in the effort.

In our talk today, Nicole and Robert describe the MDI landscape, including how these institutions uniquely serve the needs of minority consumers and small businesses. They talk about the challenges they face, and describe the offers of help that MDIs received following the murder of George Floyd in 2020, and the fact that much of it, while well-intended, was off target in actually meeting the need. And they talk about what is needed now, including insights for regulators and invitations on how our listeners can help.

The United States has a small number of MDIs, and about 9,000 community banks and credit unions. I’m among the growing group of people today who believe that many of them – maybe most – are not going to survive unless they are able to modernize their technology. If these institutions disappear, their customers will lose more than a source of financial services. These entities are woven into the fabric of their communities, deeply understanding the needs, the challenges, the possibilities of their markets. If the MDI sector can figure out how to navigate the journey to digital modernization, we hope they will chart a course that can then be followed by thousands of others.

In addition, as MDIs develop their digital skills and offerings, there’s a good chance they’ll create some solutions for communities of color that other providers will be able to learn from. That would be good for everyone.

Nicole and I live in the same part of southeast Washington DC, in the Navy Yard area. During the COVID lockdowns, we both had the opportunity to watch the city government building the beautiful arches of the Frederick Douglass Memorial Bridge. For those outside the United States, Frederick Douglass was one of America’s great slavery abolitionists in the 19th century. He was born into slavery, escaped, and became a national leader, working with Abraham Lincoln and acting as a moral force, arguing for racial opportunity and justice. His work after the Civil War included helping launch the movement to create banks that would serve freed slaves and Black communities.

He lived right across the Anacostia River from where I’m sitting now, and the bridge connects his old neighborhood with Nicole’s and mine today. It’s a reminder that the work done by minority depository institutions is part of a long, ongoing arc, and that it matters. 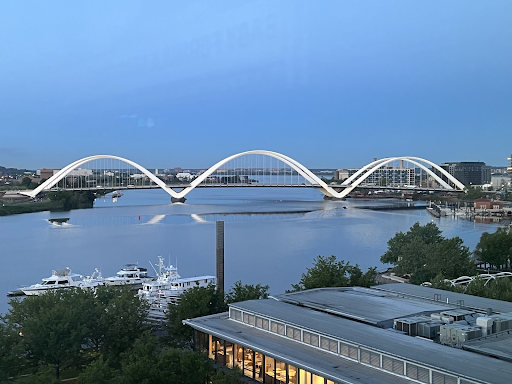 Robert, who was recently named to his current role with the holding company, has led the 95-year-old bank to several accomplishments over his fifteen-year tenure. He has:

Since October 2020, Robert has also served as Chairman of the National Bankers Association, the leading advocacy group for the nation’s minority banks. In his first of two years as chairman, he has:

Also a board member of the Community Development Bankers Association and National Black Bank Foundation, Robert is a sought-after Congressional hearing witness, speaker, and panelist on issues surrounding minority banks, CDFI banks, New Markets Tax Credits, community development finance, collaborations in the CDFI/MDI space, and the positive impact of minority banks on communities. In January 2022, he was appointed to a two-year term on the FDIC’s Advisory Committee on Community Banking and a three-year term on the Federal Reserve Bank of Atlanta’s Community Depository Institutions Advisory Council.

Robert is a member of the Georgia and New York bars. Prior to assuming his leadership role at Carver, he was a partner at Golden Holley James LLP, documenting and closing over $25 billion in public finance transactions. Through his firm, Coastal Legacy Group, he successfully developed the Carver Commons shopping center in Savannah, bringing millions in private investment to the distressed Martin Luther King Jr. Boulevard neighborhood.  Robert served as a Managing Director & General Counsel of Diversiplex, Inc., a management-consulting firm that helped Fortune 500 companies and government agencies meet critical challenges in supplier diversity. Robert began his career at the law firm Troutman Sanders in Government-Business Transactions.

Robert graduated from Harvard Law School in 1995 and from Howard University in 1992. He is father of one teenage daughter, a member of the Alpha Lambda Boulé of Sigma Pi Phi Fraternity and Omega Psi Phi Fraternity, and enjoys cooking and travel.

Nicole A. Elam, Esq. is President and CEO of the National Bankers Association (“NBA”), the premier trade association and voice for the nation’s minority depository institutions. She is the youngest President and CEO since the NBA’s founding in 1927. Nicole joined the NBA in May 2021 from JPMorgan Chase & Co. where she was vice president and government relations manager developing public policy positions and advocacy strategies in Washington, DC. In that role, she also managed national engagement strategies and led efforts on the firm’s commitment to invest $30 billion over five years to advance racial equity and drive inclusive economic growth.

Nicole has spent nearly 20 years working in public policy and public affairs. Prior to JPMorgan Chase & Co., she led the government and external affairs strategy for ITT Educational Services, Inc. and served as its primary spokesperson and lead representative with the media, policymakers, trade organizations, consumer groups, investors and the public. Nicole also worked as a senior director at the government affairs firm Ice Miller Strategies LLC. Nicole has held legal roles as an attorney at Akin Gump Strauss Hauer & Feld LLP focusing on congressional investigations and government enforcement actions, and a law clerk at the NAACP Legal Defense and Educational Fund in Washington, DC. Nicole’s early career highlights include working as communications director at the Black Leadership Forum and as a legislative assistant at the NAACP Washington Bureau. Nicole received a Juris Doctor degree, cum laude, from the Howard University School of Law where she was solicitations editor of the law review, and a Bachelor of Arts degree from DePauw University.

Remember to take a look at our upcoming global TechSprint on anticorruption, called ASET –  ‘Anticorruption Solutions through Emerging Technologies. The event will be hosted by us with the US Departments of State and Treasury. Please join us!

There are many exciting conferences this summer. Make sure to join the ABA Regulatory Compliance Conference for my keynote on the future of the compliance profession. I’ll also be back at the RegPac RegTech Innovation Summit next month. I hope to see many of you in June in Zurich at the Point Zero Forum, a unique gathering hosted by the Swiss government and Elevandi, a nonprofit entity created by the Monetary Authority of Singapore (MAS) (I serve on Elevandi’s board.) I’ll also be speaking in August in Aspen at Moonclave. And we’ll of course be at Money 20/20 in the fall.

David and I also both spoke last week in Atlanta at the summit on digital assets cosponsored by John Hope Bryant’s Operation Hope and the Office of the Comptroller of the Currency. It was an extraordinary event which includes concrete plans for follow up on how to make crypto both inclusive and safe as an investment. Watch for more to come!